MSM at the CERN Hadron Collider 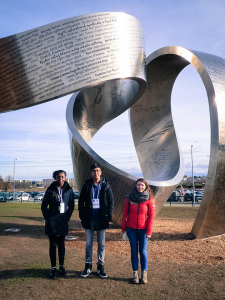 In January, two of our Year 11 students were given a fantastic opportunity to attend the world’s biggest physics laboratory, CERN, in Geneva, Switzerland. CERN stands for European Centre for Nuclear Research, and it was founded by a handful of visionary scientists in 1954 to unite European scientists and enable international physics research collaboration.​

In 2008, CERN started up the Large Hadron Collider, or LHC, the world’s biggest and most powerful particle accelerator. It consists of an 18-mile ring which is buried under the Swiss-French border. Two beams of protons are accelerated in opposite directions and made to collide at speeds very close to that of light. This can produce new subatomic particles, which enables scientists to expand our knowledge of how the universe works. Moreover, we can thank CERN for the invention of the system that all of us use daily nowadays – the Internet.

Our Year 11s, together with Dr Prisutova, joined 13 students from Fulneck School for a three-day trip to Geneva. They had a guided tour of the facilities and got to see some very impressive equipment at the laboratory, as well as having a chat with scientists that work at CERN. They learnt a lot about the exciting research that is being conducted in physics, as well as brilliant career opportunities that studying physics can offer. In addition, they enjoyed a guided tour of the United Nations headquarters in Geneva, an exciting treasure hunt around the city on a sunny Saturday, and of course the Swiss chocolate.