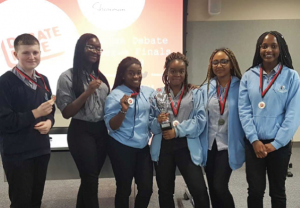 On Tuesday 21st May, Miss Evans and Mrs Gibson took our top team of students to the London finals: Johanna Jermy, Carmella Messu Pianta, Iliham Negash, Zoe Kirabo, Bradley Barker and Faith Odeyo. Students began by competing in two rounds of debating with the aim of progressing through to the semi-finals on the day. Competition was intense, but Mount St Mary’s were one of the four schools chosen for the semi-finals. MSM demonstrated excellent skill and resilience in the semi-final against tough competition, but once again they were victorious and progressed into the Grand Final!

After a long day at the University of London, everyone moved to the prestigious offices of Shearman and Sterling for the Grand Final. Our students took everything they had learned from the day, performing to a standard of their own personal best, beyond anything they had ever shown before.

Prepared speeches and notes were pushed aside for impromptu moments of inspired speaking, with passion and determination clear throughout. The judges’ decision was clear: Mount St Mary’s were National champions!

Well done to those students who competed, as well as all of the nearly 100 students who have taken part in Debate Mate over the course of this year. You have shown that we as a school have the right to call ourselves a ‘debating school’. Congratulations MSM!